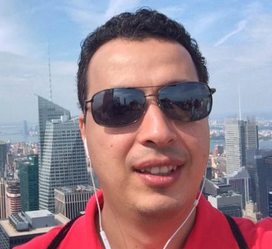 The camp? I swear that I would sacrifice my life for the camp!

-The camp? I swear that I would sacrifice my life for the camp!

The camp means everything to me and to all its inhabitants.

The camp is our soul. Our life

and it will stand high and proud forever, it has always been so anyway.

Everywhere in the camp you find someone looking for a relative

There is not a single person at the camp who was not suffered.

looking for their home or a missing body.


But we will not give up

Yes they destroyed everything but we will re-build it despite their presence.

We will re-build everything on the basis of resistance and Sharon must be aware of the resistance of the Jenin camp for all his life.

I would like to say something which has nothing to do with hope or all that ensues but to the Israelis I have to say:

May each Israeli bear this in mind.

When I heard that Sharon was coming to the camp, I was so angry that I burst into tears

Because I had a great desire to take revenge on him, to torture him so to speak.

-Do you believe you can defeat Sharon?

-He is stronger than you. How would you be able to?

He destroyed each corner in the camp without sparing one single house.

-what would you do if you had a million dinars?

-I would donate them to the injured to buy blood and to re-build the camp.

-Me too. I would donate them to the office to divide it amongst the homeless they could rent some caravans until their houses re-built so that the camp will look better than before.

If I were old enough I would have donated my blood to the injured.

If they capture your son wouldn’t you do anything to get him back?

So we feel the same for our land. Our land means everything for us.

As we used to say: Our woman still exists.

We will keep on having children. They will become stronger and braver than ever.

I am not afraid of these cowards.

They still hide behind their tanks. Afraid of civilians like us.

Their cowardice is legendary.

We are not afraid of them no matter what they do.

Let the Jews come and see the camp and experience the bombardment we endured for just one day.

They would immediately forget their idea of a Great Israel and of Jerusalem as its capital.

If only a Jew could experience what we have been through for one day!

They would abandon their conquest of Jerusalem.

After all I have been through what will become of my life?

After they shattered my dreams what is left for me to say?

There is no life.

The camp is like a tall eminent tree the tree has leaves and each leaf of this tree bears the name of a martyr.

I would like to say to the Jews that even if they break a few branches others shall grow in their place were not able to reach the top of the tree.

-The camp? I swear that I would sacrifice my life for the camp

The camp means everything to me and to all its inhabitants

The camp is our soul. our life

My greatest wish is to go back home.
Posted by Ahmed Hammad 2 comments:

Ahmed is an Agile and CMMI consultant for the last 9 years. Before that, he worked for 10+ years as a developer and a technical manager.

Blat - A Win32 command line SMTP mailer. Use it to automatically eMail logs, the contents of a html FORM, or whatever else you need to send.

Enjoy it at http://www.blat.net/
Posted by Ahmed Hammad No comments: